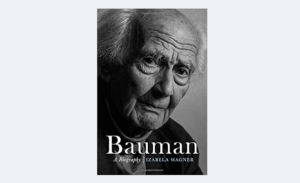 Global thinker, public intel­lec­tual and world-famous theo­rist of ‘liquid moder­nity’, Zygmunt Bauman (1925−2017) was a scholar who, despite forced migra­tion, built a very successful acad­emic career and, after retire­ment, became a prolific and popular writer and an intel­lec­tual talisman for young people every­where. He was one of those rare scholars who, grey-haired and in his eighties, had his finger on the pulse of the youth.

This is the first compre­hen­sive biog­raphy of Bauman’s life and work. Izabela Wagner returns to Bauman’s native Poland and recounts his child­hood in an assim­i­lated Polish Jewish family and the school expe­ri­ences shaped by anti-Semi­tism. Bauman’s life trajec­tory is typical of his gener­a­tion and social group : the escape from Nazi occu­pa­tion and Soviet secondary educa­tion, commu­nist engage­ment, enrol­ment in the Polish Army as a polit­ical officer, partic­i­pa­tion in the WW II and the support for the new polit­ical regime in the post-war Poland. Wagner sheds new light on the post-war period and Bauman’s activity as a KBW polit­ical officer. His evic­tion in 1953 from the mili­tary ranks and his acad­emic career reflect the dynamic context of Poland in 1950s and 1960s. His profes­sional career in Poland was abruptly halted in 1968 by the anti-Semitic purges. Bauman became a refugee again – leaving Poland for Israel, and then settling down in Leeds in the UK in 1971. His work would flourish in Leeds, and after his retire­ment in 1991 he entered a period of enor­mous produc­tivity which propelled him onto the inter­na­tional stage as one of the most widely read and influ­en­tial social thinkers of our time.

Wagner’s biog­raphy brings out the complex connec­tions between Bauman’s life expe­ri­ences and his work, showing how his trajec­tory as an ‘outsider’ forced into exile by the anti-Semitic purges in Poland has shaped his thinking over time. Her careful and thor­ough account will be the stan­dard biog­raphy of Bauman’s life and work for years to come.